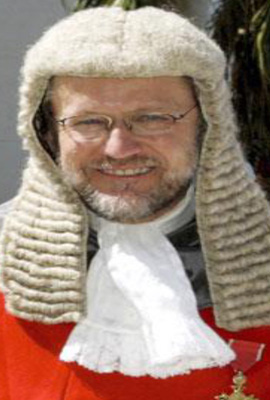 The late Sir Richard Ground was appointed to the JLSC in accordance with section 105(1)(d).

He began his legal career in private practice at 1 Brick Court, Middle Temple, where he specialised in media law from 1976 to 1983. In 1983 he moved to the Cayman Islands as Senior Crown Counsel, and was Attorney General of the Cayman Islands from 1987 to 1992.

Sir Richard was born on 17th December 1949, in Stamford, England, and educated at Oakham School; Lincoln College, Oxford; and the Inns of Court School of Law. He won an open scholarship to Oxford in 1967 and the Violet Vaughan Morgan University prize for literature in 1968. He graduated with a BA Hons in English Language and Literature in 1970

Sir Richard was called to the Bar, in Gray’s Inn, in 1975; was appointed Queens Counsel (Cayman Islands) in 1987; and was awarded an OBE in the New Year’s Honours List 1991 for his services as Attorney General in Cayman.

His professional publications include Halsbury's Laws, 4th ed., Vol. 22, "Hire Purchase and Consumer Credit" with Brian Neill QC; Halsbury's Laws, 4th ed., Vol. 36, "Pledges and Pawns"; and he was the precedents editor for the 1981 edition of Gatley on Libel and Slander (Common Law Library No. 8), Sweet & Maxwell, London 1981. He has also published Creator's Glory, a book of photographs of the wildlife of the Cayman Islands; and The Birds of the Turks & Caicos Islands.